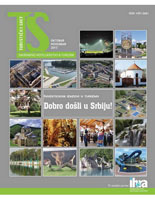 In the crowded hall 3 at the Congress centre „Master“, on October 2013, on the first day of International Tourism Fair in Novi Sad, was held a conference called „Investment reputation management in tourism“, during which were presented best tourism projects. Under the slogan "For the most perspective towns and municipalities in Serbia’s tourism", the conference was organized by the magazine Turistički Svet, with the support of the Standing Conference of Towns and Municipalities of Serbia, in cooperation with SACEN International.

Organizers and eminent participants from state institutions, education and industry, like Miroslav Vasin, Provincial Secretary for Economy, Employment and Gender Equality, and professor Dr Slobodan Unković, eminent professor emeritus on the University Singidunum, agreed that tourism is the future and strategic industry branch of our country, and that it is a right time for a government to devote more attention to this important industry sector.

Speaking of investment potentials of local governments in Serbia, Slađana Grujić from the Standing Conference of Towns and Municipalities of Serbia, stated that the position of local governments is endangered since 2012, when several fees and taxes were canceled, and there was also announced the reduction of payroll tax, which will, according to her estimations, additionally endanger local budgets, because payroll tax is the biggest single income of local governments and for some local budges represent the source of 50% of all incomes.

That diaspora is interested in investing in Serbia, confirmed Vukman Krivokuća, assistant manager at the Diaspora Cooperation Office, revealing that political stability, law security and bank support are key elements for investors, and negative circumstances are bureaucracy, corruption on all levels and unenviable infrastructure.

Especially for this occasion, editorial board of the magazine Turistički Svet published new, special issue of the magazine, under the title: Investment challenges in tourism: WELCOME TO SERBIA – on Serbian and English language, dedicated to tourism and investment potentials of Serbia, of which spoke 24 managers of towns and municipalities in Serbia.

- Deeply believing that tourism  is the best way to send an invitation card to investors, we opened the pages of Turistički Svet for towns and municipalities in Serbia, in which tourism is among first positions in their development strategies and invited mayors  and town managers to present their tourism and investment potentials and projects. Thereby, not forgetting eminent entrepreneurs and representatives of educational institutions, because they are the base and creators of growth vision – said editor in chief of the magazine Turistički Svet Ljiljana Rebronja, who was the initiator and organizer of this successful conference.